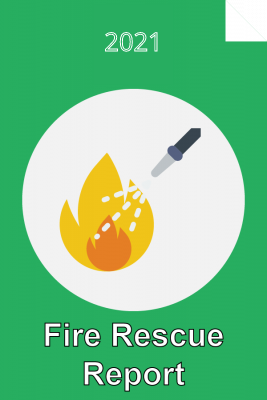 This annual report is dedicated in memory of Chief Robert Stuart. Sadly, Chief Stuart died on January 6, 2022.Chief Robert Stuart’s father, Ned R. Stuart, led efforts to organize the department in 1923. Ned was elected as the towns first Fire Chief, a position he held for 40 years. Also in 1923 the town purchased it’s first motorized triple combination pumper for $6500 from the American LaFrance Firetruck Company. The Stuart family was personally responsible for upkeep and repair of the pumper truck. The pumper truck was stored in the Stuart Motor Company building on Mountain Street , the same location where the Fire Department held meetings and trainings, until a permanent fire station was built in 1928. Alongside his father, Chief Robert Stuart served with the fire department for several years and during the 1960’s he served as Interim Fire Chief from 1961 to 1963 and as the Fire Chief in 1963. When Robert stepped away from the fire department he never truly left. He proudly carried around his Fire Chief’s badge and was very proud to show it to you. Thru the years he loved to visit the firefighters at the fire station and share stories about the past. He will be greatly missed.

While the substance in the annual report focuses on details and data from the Fire Rescue Department’s services, projects, and performance it is the citizens, and our staff, that is at the heart of our mission. We are very blessed and appreciative for the tremendous support we receive from our town, Mayor, Board of Alderman, town departments and other agencies that we work with. We could not do what we do without everyone’s assistance and support.